One of our mentors, Balliol College Oxford undergraduate Zoe Cannell, looks back on her first residential:

At the beginning of July, Y9 and Y10 students from the Kent Academies Network came to Tonbridge School for the 2016 summer residential, whilst Y11 and Y12 stayed in Cambridge, at Fitzwilliam College and Queens’ College. This is the first time we have had a full set of four cohorts on the programme, being the programme’s fourth year, and it was the first residential with which I had been involved.

At Tonbridge, the new cohort of Year 9 students threw themselves into the programme from the very first day, with some very lively and bubbly characters emerging straightaway. The Year 10 students immediately mixed with the new cohort, offering support and a mature attitude, as well as helping the new students (and mentors!) settle in. 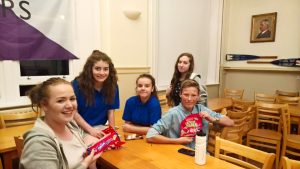 A number of experienced teachers from the network taught lessons in core subjects of Mathematics, English and Science as well as introducing new subjects, including Philosophy, Classics, Coding and Sociology. There were also opportunities to do some Art and drama. All of the staff commented on the excellent levels of engagement of the students.

Some lessons were taught by the mentors, for example French student Siân gave a lesson to the Y10s on the way that poetry reflects the era in which it was written, culminating in the performance and analysis of modern pop songs as examples of 21stcentury literature. The students engaged thoughtfully with these texts and were able to make perceptive comparisons between modern writing and examples from history. As a Classicist, I taught the Year 9s about Greek tragedy, focusing on the Oresteia, as well as the conventions of Greek theatre. The students became engrossed in this, and their lack of previous exposure to Classical subjects allowed them to take a very interesting perspective on the topic. They engaged very well and asked lots of interesting questions, both about the classical world and about the university course. 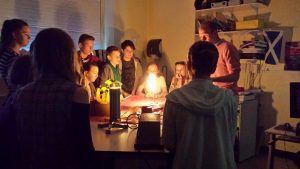 Year 10s spent part of the week preparing for a Mock Trial, led by mentor and law student Sandimini, which was held on the final day of the programme. The cohort divided themselves into the Prosecution and the Defence, having to devise well-planned arguments to win the favour of the jury, comprising the Year 9 students. This activity brought out real strengths in the cohort, with many showing logical and critical thinking when assessing the evidence they were presented with, as well as the ability to structure a coherent case and confidently present their ideas.

As well as playing the jury for the Year 10s’ trial, the Year 9 students worked on a presentation project. They each had to choose a topic they were interested in and make an oral presentation on this subject to present at the end of the week. This allowed the students to explore an area of interest which they may not have looked at in any depth before, as well as the chance to practice their public speaking skills.

Every afternoon the students did sports together, ranging from a circuits class to basketball, tennis and football. Back at the boarding house, both students and mentors spent time together socially, teaching each other the piano, playing pool and listening to music. As a group, we also celebrated three birthdays during the week with cake and had a film night and a team quiz.

Both cohorts also spent a day at Imperial College Reach Out Lab, where they had a lecture from a PhD student and took part in a practical experiment testing the strength of bones. This was a great opportunity for them to visit a top university and also take part in activities that they wouldn’t usually get the chance to do in school.

Each evening, a speaker came to deliver mini-lectures about their lives, designed to inspire and engage the students. They heard from top creative consultant Hilary Carty; Cath Nicholson, former world-class hockey player who currently teaches at Sevenoaks School; Damon Buffini, who used to be head of private equity firm Permira; and Ceri Jones, Head of Caterham School and co-founder of the Accelerate and Access Foundation which supports this scheme. Many of the speakers have come from a similar background to the students and achieved great things in their lives; all emphasized the importance of ambition, resilience and seizing opportunities. 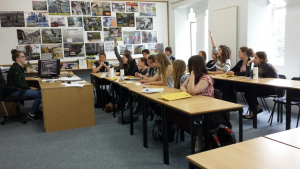 The week was great fun, as well as being very productive. The students were engaged with everything, including trying subjects which they would not previously have considered. The students took the opportunity to ask thoughtful questions and explore their personal interests. All of the students showed how capable they can be in a work setting, as well as also making the most of their free time and enjoying time with their new friends.